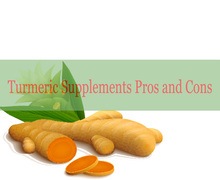 The main ingredient of curry powder, turmeric has been used in Indian and Chinese medicine for thousands of years to relieve conditions ranging from flatulence to menstrual irregularities. It is now recognised in the West as a powerful antioxidant and anti-inflammatory agent. You must be wondering whats is turmeric supplements Pros and Cons? Keep reading.

The yellow-flowered turmeric plant is a member of the ginger family. It is grown in Indonesia, China, India and other parts of the tropics, where the dried aromatic root-like stem is ground to form a powder. It contains yellow-coloured curcumin, the key active component, and also an orange-coloured volatile oil. The herb has been shown to have a positive effect on a variety of medical conditions.

Apart from its culinary uses, turmeric is used as a preservative, colourant and flavouring agent in many food products including baked foods, pickles and meat products.

Turmeric has an antioxidant effect approximately equivalent to that of Vitamins C and E, meaning that it provides powerful protection against the damage that can be done to the cells of the body by unstable oxygen molecules called free radicals. Turmeric, and especially its component curcumin, acts as an anti-inflammatory agent both when applied topically as a poultice and when used orally Laboratory studies suggest that turmeric may have significant anticarcinogenic properties, and animal studies indicate that it may lower blood cholesterol levels. Its anti-inflammatory and antioxidant properties, combined with its ability to increase the secretion of bile and the production of liver enzymes, explains its liver-protective effects against toxins. 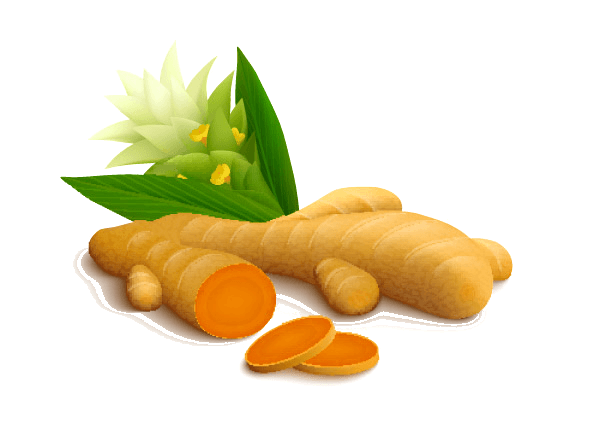 If turmeric is taken internally its principal effects are associated with the ability of curcumin to suppress the release of inflammatory agents within the body’s tissues. It is also thought to stimulate the production of cortisone from the adrenal glands, which indirectly assists the healing process. Curcumin has been shown in animal studies to have therapeutic properties equivalent to those of cortisone and phenylbutazone in cases of acute inflammation (although it is only half as effective in chronic cases), with the advantage that it has no toxic results. If turmeric is applied to the skin, as is common in India, it can ease pain and inflammation in muscles and joints Laboratory research has shown that turmeric can not only inhibit the early development of cancer cells but may also stop the progression of the disease as well as boosting the body’s own antioxidant system By lowering cholesterol levels and preventing the coagulation of blood platelets, turmeric has a role to play in combating atherosclerosis, even when taken in small doses. Its combination of antioxidant and anti-inflammatory properties, together with its ability to increase bile acid output provides evidence to support the traditional use of turmeric for protecting the liver. A preliminary study has shown the herb to be helpful for people with indigestion. By both hindering the formation of wind and releasing it if it does form, turmeric has a positive effect on the gastrointestinal system and can also inhibit intestinal spasm. If you suffer from the disease that requires the constant use of Ativan (heart diseases, cramps and life-threatening allergic reactions), you have to establish a reliable channel of communication with your drug supplier in order to constantly have a stock of fresh medicines with a normal shelf life.

In a clinical trial patients suffering from rheumatoid arthritis were given 1200 mg of curcumin a day and the results were compared with those of a group given the traditional treatment of 300 mg of phenylbutazone. Both groups reported similar improvements in walking time, stiffness and Joint swelling, and, unlike phenylbutazone, curcumin has no adverse side effects when taken in the correct amounts.

In one trial 62 patients with ulcerating mouth or skin tumours which had not responded to traditional treatments such as chemotherapy, radiotherapy or surgery were treated with an external application of turmeric extract or curcumin three times a day for 18 months. At the end of the study, it was found that itching had been reduced by 70%, pain by 50% and the size of the lesion by 10%.

The recommended dose for turmeric is between 500 mg and 1000 mg of the dried standardised root extract (containing 95% curcuminoids) per day. As an anti-inflammatory: Take 300 mg up to three times a day with meals. When you are buying a turmeric supplement ensure that it is a standardised 95% curcuminoids. Here is a list of some best curcumin supplements in the UK.

If turmeric is combined with the enzyme bromelain to improve absorption, it should be taken between meals for best results.

Do not exceed the recommended dose. Although generally safe, turmeric in large doses may cause gastrointestinal problems or even ulcers

REMINDER: If you have a medical condition, consult your doctor before taking supplements.

Turmeric appears to be very safe in recommended doses. However, there is some evidence to suggest that — because turmeric enhances the release of bile in the liver — high doses should not be taken by people with gallstones since gallstones can hinder the flow of bile.