Glucosamine, this promising arthritis fighter helps to build cartilage- which provides cushioning at the tips of the bones- and protects and strengthens the joints as it relieves pain and stiffness. Although your body produces its own glucosamine, supplements can help. In our commitment, we inspire people to embrace a more natural approach in choosing the right product. We have gone through different brands of products and chosen the top 5 Best Supplements for bone and joint health “

Glucosamine (pronounced glue-KOSE-a-mean) is a fairly simple molecule that contains sugar glucose. It is found in relatively high concentrations in the joints and connective tissues, where the body uses it to form the larger molecules necessary for cartilage repair and maintenance. Recently glucosamine supplement has become very popular and you can buy them as a nutritional supplement. Various forms are sold, including glucosamine sulphate and N-acetyl-glucosamine (NAG). Glucosamine sulphate is the preferred form for arthritis: it is readily used by the body (90% to 98% is absorbed through the intestine) and appears to be very powerful in relieving this condition. 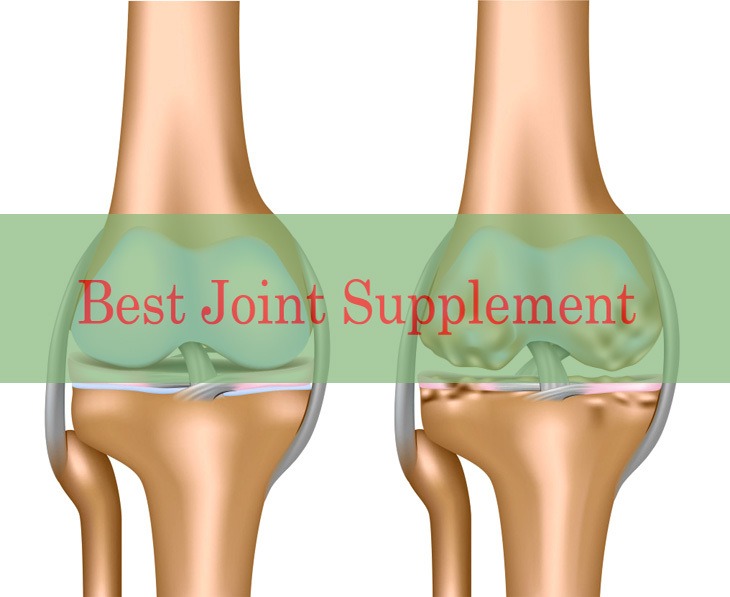 Our List of Best Joint Supplements in the UK 2022

Why Glucosamine with Chondroitin in the Best Choice?

Glucosamine is actually classified as an amino sugar (technically an amino-monosaccharide). It’s naturally synthesized in the human body (and in the bodies of vertebrates and marine creatures as well) and is a basic building block of connective tissue, like the cartilage in your knee, for example. While we have an ample amount of the stuff when we’re young, we lose some of it as we age, leading to the thinning of cartilage, which frequently progresses to the common condition known as osteoarthritis.

Osteoarthritis is one of the most common of the chronic health conditions. About two-thirds of all people over the age of sixty-five have physical signs of it that would be visible on an x-ray, but many don’t know it because they have no symptoms. For others, the symptoms range from mildly annoying (a pain in the joint when it rains) to downright debilitating. After all, when cartilage in the joints wears down, eventually you’re left with little or no shock absorbers—just bone rubbing on bone. That’s got to hurt. And over time, it will permanently damage your joint. Any joint can be affected; though it’s very common in the knees, arthritis can also affect the hips, neck, lower spine, hands, and feet. 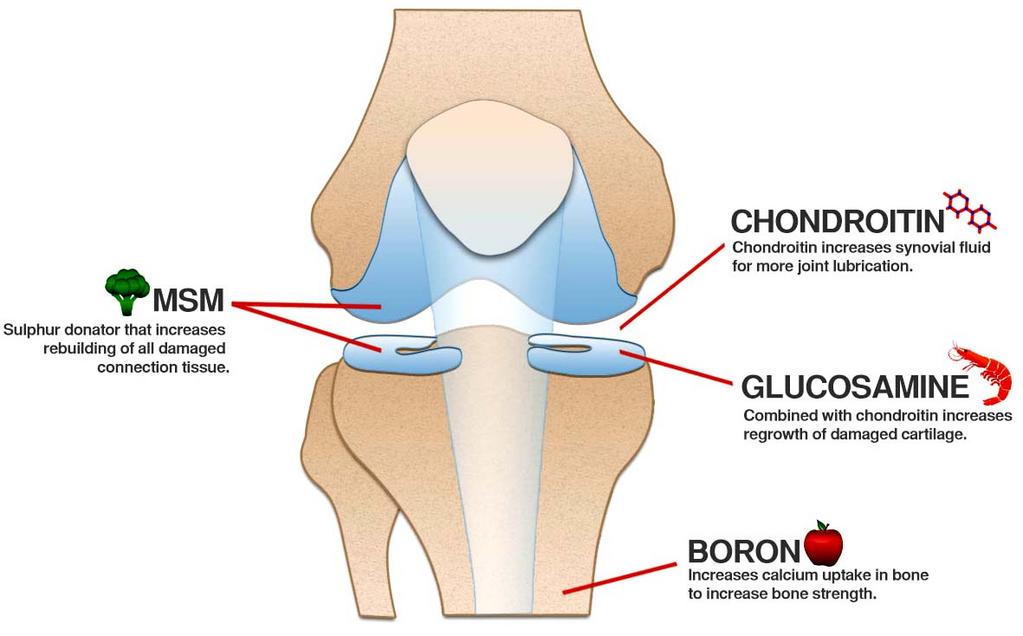 Glucosamine—and its partner chondroitin—can help. Many studies have shown that glucosamine and/or chondroitin are beneficial in helping to repair damage to the joints caused by osteoarthritis (more on chondroitin in a minute). While it can’t bring cartilage back, it can prevent further loss as well as reduce symptoms of pain, swelling, and stiffness or noise in the joints.

This is important, especially for post-menopausal women, who have a greater propensity toward osteoarthritis than men. In two independent, three-year, randomized, placebo-controlled studies, glucosamine sulfate was shown to slow the progression of osteoarthritis symptoms. After three years, postmenopausal participants in the groups given the this, showed no joint space narrowing whatsoever, while those given a placebo did. It’s not only that, the glucosamine sulfate user group showed an improvement in their WOMAC Index (a standardized measure of pain) while there was a trend for worsening of pain in the placebo group.

We all know that the Joint pain is uncomfortable and very frustrating, especially for those who are used to living a healthy and active life. When we want relief from the pain, many of us reach for remedies like the prescription drugs from the doctor in the category known as COX-2 inhibitors (Celebrex and Vioxx are famous examples) or pain relievers such as acetaminophen (Tylenol) and nonsteroidal anti-inflammatory drugs (Aleve). These drugs do offer immediate relief, but they’re hardly without problems (witness the class-action suits over Vioxx).

Remember that none of them addresses the underlying cause of the pain. Natural supplements like glucosamine not only help with pain—albeit a bit more slowly—but have the potential to stop the progression of the condition that’s causing it. Best of all, they do so without any serious side effects.

The Role of Chondroitin

You’ll often hear glucosamine mentioned together with another supplement called chondroitin. There’s a reason for that. Chondroitin sulfate is another building block of connective tissue. It actually stimulates the cells (called chondrocytes) and therefore works beautifully when paired with glucosamine to speed the regeneration and recovery of bone tissues. While chondroitin taken alone doesn’t seem to do very much, when taken together with glucosamine it offers significantly greater improvement of osteoarthritis than when either is used separately.

Chondroitin sulfate can also decrease the joint pain and slow the rate of cartilage loss in people with osteoarthritis. Research from the American College of Rheumatology reported that the combination of both sulfates is at least as successful as the prescription drug celecoxib (brand name Celebrex) in treating pain caused by moderate to severe osteoarthritis of the knee. So for best results, use them together.

Glucosamine/chondroitin therapy requires patience: You may have to wait anywhere from eight to twelve weeks to see results. Some studies suggest that about two-thirds of adults who use both will experience benefits but that one-third will experience nothing.

Most studies have used glucosamine sulfate, so unless you’re allergic to sulfates, that’s probably your safest bet. The best studies used 1,500 mg a day, though I’ve heard some health practitioners swear by the idea of “loading up” with 3,000 mg a day for the first month and then dropping down to the recommended 1,500 mg. Some evidence suggests the dose has to be adjusted for obesity. Chondroitin seems to work well at around 800 to 1,500 mg daily.

Although some doctors hail glucosamine as an arthritis cure, no single supplement or combination of supplements can claim that title. Glucosamine does, however, provide significant relief from pain and inflammation for about half of arthritis sufferers — especially those with the common age-related form known as osteoarthritis. It can also help people with rheumatoid arthritis and other types of joint injuries.

This glucosamine supplement is used to treat arthritis in about 70 countries, it can ease pain and inflammation, increase range of motion, and help to repair ageing and damaged joints in the knees, hips, spine and hands. Recent studies show that it may be even more effective for relieving pain and inflammation than nonsteroidal anti-inflammatory drugs (NSAIDs), such as aspirin and ibuprofen, commonly taken by arthritis sufferers — without their harmful reaction. Moreover, while NSAIDs mask arthritis pain, they do little to combat the progression of the disease — and may even make it worse by impairing the body’s ability to build cartilage. By contrast, glucosamine helps to make cartilage and may repair damaged joints. Although it cannot do much for people with advanced arthritis, when it has completely worn away, it may benefit the millions of people with mild to moderately severe symptoms.

As a general joint strengthener, glucosamine may be useful for the prevention of arthritis and all forms of age-related degenerative joint disease. It may also speed healing of acute joint injuries, such as a sprained ankle or finger. Athletes and sportsmen and women often take glucosamine to help to prevent muscle injuries.

Forms that you can buy in the UK

The usual dosage for arthritis and other conditions is 500 mg glucosamine sulphate three times a day, or 1500 mg daily. This amount has been shown to be safe for all individuals and worthwhile for most.

Glucosamine is typically taken a long term and appears to be very safe. It may not bring relief as quickly as conventional pain relievers or anti-inflammatories do (it usually works in two to eight weeks), but its advantages are far greater and longer-lasting when it is used over a period of time. Take glucosamine with meals to minimise the chance of a digestive upset.

In addition to glucosamine, some supplements contain a related cartilage component called chondroitin sulphate and sometimes other nutrients, such as niacin or S-adenosylmethionine (SAM). These are purported to have enhanced properties, but research-based evidence for such benefits is lacking. Other supplements that are sometimes taken along with glucosamine for the relief of arthritis include Boswellia, a tree extract from India; devil’s claw from Namibia; celery seed extract; and the topical pain reliever cayenne cream. No aftereffect has been found when glucosamine is used with other supplements or with a prescription or over-the-counter medications.

Supplements of glucosamine — a natural substance produced in the body — appear to be virtually free of bad reaction, although no long-term studies have been done. Gastrointestinal effects, such as indigestion or nausea, are rare in those who take glucosamine supplements. Should any of these symptoms occur, try taking glucosamine with meals.

In treating any inflammatory condition like arthritis, we never want to overlook the king of the natural anti-inflammatories, omega-3 fatty acids (fish oil). Fish oil works by reducing the number of inflammatory messenger molecules made by the body’s immune system. The Arthritis Foundation recommends eating at least two fish meals a week—particularly in fatty fish such as salmon, mackerel, and sardines. High-quality fish oil supplements are an excellent way to get the many health benefits of omega-3 fatty acids. Other ingredients you may see on the ingredients list in a glucosamine-chondroitin formula may include sea cucumber (Cummaria frondosa), grape seed extract, Boswellia, and turmeric supplement, all of which have varying degrees of anti-inflammatory action.

You may feel like exercise is out of the question if you have arthritis. Not so. Moderate exercise can be your best friend—building strong muscles around the joints can go a long way toward relieving joint pain, not to mention the benefits exercise provides to overall endurance, well-being, and mood. Two exercise modalities worth checking out are tai chi, a very gentle form of martial arts that involves soft, flowing movements and no stress on the joints, and water aerobics, which can be done at different levels of difficulty without putting any stress on the joints.